For his outstanding creation and demonstration of Solar-Powered Aircraft for sport and adventure flying, ‪Eric Raymond‬ received the Henri Mignet Diploma at FAI Award Ceremony in Rotterdam.
This diploma is awarded each year to an amateur aircraft builder or a group of builders, who have developed an experimental aircraft of any category.

We are proud to announce that the Sunseeker Duo was honored at this year’s Berblinger Competition. The Prize this year is shared by three deserving endeavors.
Second prize was awarded to Eric and Irena Raymond for the project “Sunseeker Duo”.
“The Sunseeker Duo is the logical next step in the development of solar-powered aircraft. The project combines a large number of great ideas in a sophisticated overall design and is based on its designer’s many hours of experience flying solar-powered aircraft.”
Find more about the Berblinger prize here:
www.berblinger.ulm.de/html/archive2013

In an extremely exciting competition, the participating aircraft were evaluated on several days by an independent jury comprising experts from the aerospace industry, representatives of universities and research institutes, aviation historians and representatives of the town of Ulm.
The winners of Berblinger Competition 2011 were finally chosen from the pilots who completed the flight task to Ulm and back. As the planes competing were so different, the judges chose three winners, each from a different class.
”The prize to Eric Raymond marks a further award in recognition of the contributions of this pioneer of solar flight towards the global development of purely solar powered aircraft .This ranks him alongside such prominent names as Paul McCready, Günther Rochelt and Prof. Voith-Nitschmann´s team at the University of Stuttgart , winner of the Berblinger Prize in 1996. In the last 20 years, the Sunseeker II has proven to be a suitable test vehicle for solar cells.”
Find more about the Berblinger prize here:
www.berblinger.ulm.de/html/archive

Eric Raymond flew the Sunseeker for demonstrations and won a Gold Medal for the best Experimental aircraft. He also set two World Records for solar powered aircraft during the event. One for time in the air, the other for absolute altitude, about 20,380 feet.

Eric Raymond received the award for ‘most innovative project’ at AERO Friedrichshafen’s first semi-annual E-flight expo. The `show within a show’ is intended to showcase electric, ecological and evolutionary aircraft projects. Solar Flight and the Sunseeker II have begun the first ever Tour of Europe made by a solar-powered aircraft. 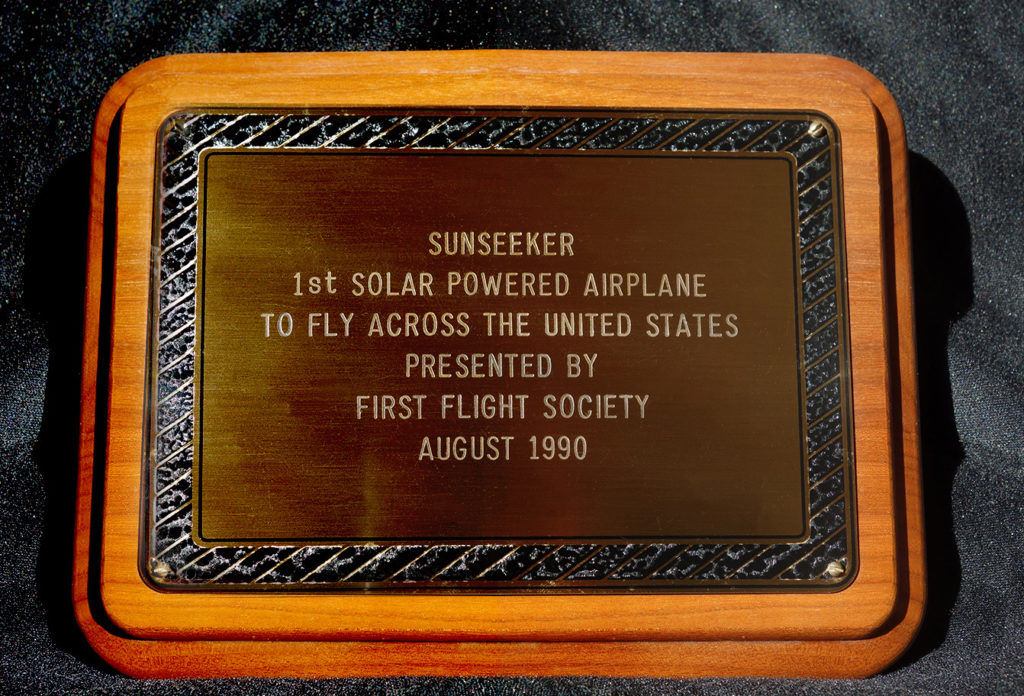 AWARD for the first solar powered flight across the USA

The first crossing of the United States with a solar powered airplane was made by Eric Raymond in his Sunseeker I. Eric Raymond is one of the most remarkable pilots, inventors and designers of this era. For his exceptional achievement was awarded by First Flight Society.

AWARD for the Coast to Coast flight by a solar airplane

After flying from Coast to Coast on solar power, Eric Raymond received a trophy for promoting environmentally friendly flight. His expedition began in the Southern California desert and with 21 flights ended in North Carolina, all the time flying just with natural and renewable energy sources.